As seen from many aspects Antarctica is a marvelous, wondrous continent. Of all the continents it deserves most the adjectival determiner “most” or the other form of the superlative degree in many cases. First of all it is the southernmost and the most remote continent. The shortest cut between Antarctica and the other main landmasses of the globe covers 1 112 kilometers and runs through Drake Passage — between South America and the South Shetland Islands. If you take whatever other route the distance would exceed 2500 kilometers. 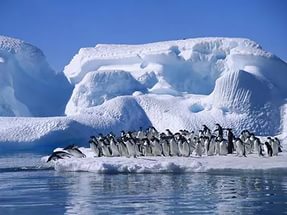 Antarctica is the coldest continent — the lowest temperatures yet recorded there reach (-89 °C). Its main climatic characteristic is the permanent covering of ice and snow. On the coast, where the ocean has a warming impact, the mean annual temperature goes up to about 1 (-17 °C) whereas the lowest winter temperatures reach down to (-40 °C). Inland the mean annual air temperatures read about (-55-57 °C). These characteristics are considerably harsher than the conditions existing in Oymyakov, Siberia, where the lowest temperatures ever recorded in the Northern Hemisphere were measured or than those in Greenland’s central parts. The world’s! lowest recorded temperature — (-89,2 °C) — was measured at East Russian Antarctic Station. Meteorologists believe that at Antarctica the temperature can drop even more and reach an absolute minimum of (-92,5 °C). I According to scientific estimates similar climatic conditions may exist on Mars.

Antarctica is the world’s highest continent. Its average height can be computed as of the order of 2 300 meters The highest point in the ice sheet measures 4 100 meters, whereas the highest summit is the Vinson Masif (5 140 meters). Only three per cent of the continental territory is free of ice and snow and this happens only in the antarctic summer.

There are five acting volcanoes in Antarctica, the most notorious being the Mt. Erebus (3 800 meters) on Ross Island. Its smoking crater was observed as early as the time of Shackleton’s and Scott’s first expeditions another volcano is the Mt. Melbourne to be found to the north of Mc Murdo Sound, the American base in the Transantarctic Mountains. There is one more volcano on Deception Island, yet another volcanic zone which belongs to the archipelago of the South Shetland Islands. Long dormant, for more than a century in fact, its crater had turned into a pleasant, quiet bay — to shelter comfortably many a whaler. About ten years ago, however, the island justified its name and the volcano erupted, a deadly surprise for the polar explorers there. Today only the skeletons of the burned down and abandoned structures and the warm volcanic ashes betray the lurking natural force, lying in wait.

With its everlasting ice sheet Antarctica is roughly roundish; this shape being partly broken by the two big and deep gulfs of the Weddell Sea and the Ross Sea and by the narrow and hooked 16 000-km-long finger of the Antarctic Peninsula. The ice continent is the fifth largest, covering 14 million square kilometers on an ave: age, and bigger than Australia and Europe. The waters of the Indian Ocean, the Pacific Ocean and the Atlantic Ocean lave m shores and all three are known together as the South Ocean.

The Quaternary Glacial Period has not ended yet, though we live in an unusually warm interglacial age. Some 18 000 years, ago glaciers covered 30 per cent of the globe. The reign of the ice and the harsh climatic conditions is to be restored and id going to last at least another 40 000 years. We reassure ourselves that the cold spell will probably not set in during the following 3 500 years. Naturally nobody could be sure exactly how the Earth:, climate is going to change, but certainly man is to be considerably better prepared and equipped to deal with his next encounter with frost, at least better than his predecessors.